Formalising “the bank of mum and dad”

What is the informal loans market?

The informal loans market, known colloquially as “the bank of mum and dad”, represents billions of dollars in transactions per month yet remains a largely untapped resource for the financial services industry. A 2012 study on informal lending by the Commonwealth Bank, revealed that “Australians borrow more than $1.6 billion per month from their “nearest and dearest”.

A survey conducted by ANZ Bank, Money Minded Report: The Reach and Impact on Money Minded in Asia-Pacific 2010–2011, also in 2012, showed that 23.5% of Australians owed money to family and friends, while just 5.1% had a personal loan from a bank.

A host of software as a service (SaaS) facilities such as Puddle, Able, Ledge and Paym have emerged around the world seeking to semi-formalise the process of lending and borrowing between friends and family. In addition to mitigating the awkwardness of chasing unpaid loans, the facilities can function as a means to document the loan process to help ensure a loan is not deemed to be a gift, and also educate children on managing a semi-formal loan.

The fact that borrowers and lenders using loan management platforms are known to each other, typically parents lending to children, means that interest rates negotiated by the counterparties are generally set at 0–2%.

“The platform allows two individuals that are known to each other — it’s critical to the piece that they have a relationship — to create a loan between themselves that matches their own unique circumstances, negotiate within the platform to make changes between the offer and what is acceptable and reach a legally binding agreement,” he said.

“Once the loan is established, [the services] offer a management tool to send reminders and recalculate and adjust the loan throughout the repayment cycle until the loan is completed between the parties.”

The key difference between peer-to peer lending services and loan management tools is that the parties to the loan transaction under the latter are necessarily known to each other. Dean noted that loan management providers do not offer a mechanism for borrowers or lenders to find each other as peer-to-peer lenders do.

“Borrowers or lenders will self-serve the arrangement to people that are known to them. The credit decisioning is intrinsically [based on], ‘I will lend to that person because I have a relationship with that person’,” he said.

Dean emphasised that loan management providers cannot charge users a percentage of the loan amount if they want to operate outside the purview of Australian credit licence requirements.

“If we were taking a position within the loan by taking a percentage [of the loan amount] then we would be, from a technical point of view, participating in the loan and, therefore, would be part of the credit activity. Therefore, we would be a credit provider and would have to be licensed as such,” he said.

Dean added that under the Credi model, users are not charged until they use the platform three times, at which point they will be charged a fee to subscribe.

What happens in the event of a loan default?

According to a 2016 paper by RMIT University, Lending to family & friends: an invisible phenomena, the default rate on loans between family and friends is generally quite low as “social ties reduce moral hazard via social sanctions, modelled as a cost to the borrower”. In other words, a borrower risks social penalty among friends or family if they fail to repay a loan.

While loan management platforms do not have the power to enforce loan repayment, Dean noted that the availability of documentation that records all transactions in relation to a loan is likely to mitigate disputes.

“We provide both parties with evidence and documentation and performance [records] under an agreement. The very fact that it exists means there’s almost no ambiguity,” he said.

“Armed with the information we provide both parties, I would imagine two things would happen. One, if there was a dispute then the enforcement of that would be easier because of clarity. Two, the very existence of that information would put off the incidences of disputes because the existence of the information removes the ambiguity that people would use as a defence.”

How are loans from family and friends typically used?

Informal loans tend to be used primarily for small-to-medium expenses such as rental bond payments, home appliances, university fees, motor vehicle purchases or simply covering expenses until the next pay day. Dean estimated that of the $12 million processed by the Credi platform in the first six weeks since its launch, the average loan amount was around $40,000, with a typical duration of three to five years.

“We see a lot of loans that are effectively giving people a period of time to resolve a problem, manage repayments, consolidate loans, change something in their life or sell or buy something. The largest loan on our platform was $520,000, between family members, which I can only surmise was the documentation between a parent and a child to help with a property purchase,” he said.

The global experience of semi-formal lending shows that loan amounts are generally quite modest. A 2014 study, An Invisible Finance Sector: How Households use Financial Tools of Their Own Making, by the US Financial Diaries found that 77% of the amounts borrowed from family and friends by Americans was $500 or less (see Figure 1).

Figure 1: Amounts borrowed from family and friends (US) 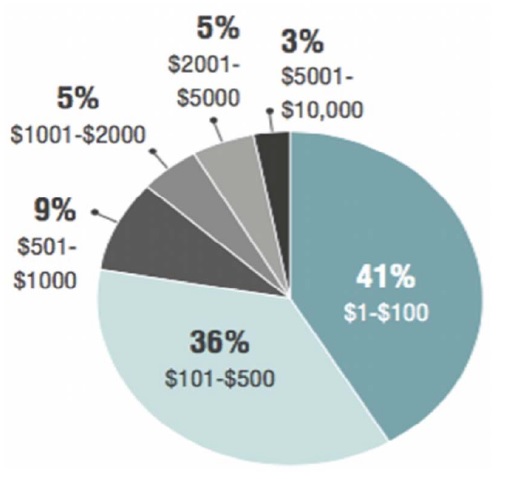 What are the advantages of loan management platforms?

Apart from the relatively low costs to borrowers, the key advantages of loan management platforms include: the minimisation of emotional elements, documentation of transactions, and potential for it to be used as an education tool for young investors.

A 2012 study by the Commonwealth Bank highlighted the potential for emotional conflict to emerge between friends and family around the repayment of loans. The research revealed that 49% of Australians experienced disagreements with friends and family over loan repayments, while one in five had lost friends over borrowing and lending money.

Dean explained that loan management platforms can serve to remove the emotional element of lending to friends and family to some extent.

“It allows people to get on with their lives while the platform organises things. You can avoid issues such as meeting someone whom you lent money to and you can’t help yourself asking them whether they’re going to make the repayment next week,” he said.

“With a [loan management tool], you know that they know they’ve got to make the repayments so you can conduct your relationship in the normal way without any loan transaction getting in the way. So, there are advantages in terms of the management of those kinds of relationships.”

Dean added that loan management tools can also help prevent dynamics of relationships being irrevocably altered by lending and borrowing between friends and family.

“What can happens is that people come out of the loan [process], and all the baggage of the loan is continued. It never leaves them. Whereas, in fact, the process of the loan may have been actually managed quite well,” he said.

“If you [the loan] into a platform, the borrower can leave the process at the same peer group level that he entered it. From the borrower’s perspective it actually preserves their integrity in their peer group.”

However, RMIT University’s 2016 paper, Lending to family & friends: an invisible phenomena, highlighted the fine line that parties walk in this respect.

“The introduction of loans can also alter the relationship between parties. A lender for instance can feel that he or she has some say over how the recipient handles financial matters, even if that wasn’t part of the original deal,” he said.

“Naturally this leads to arguments and resentment. Conversely the recipient may feel weak or dependent, or even guilty. With loans, treating the transaction as at least in part as a business matter, with terms set out, can lessen emotional dangers.”

Documenting loans between friends and family via a loan management platform can potentially mitigate the chance that a loan is deemed to be a gift should a disagreement arise between borrower and lender. When deciding whether a transaction constitutes a loan or a gift, courts will consider issues such as the formality of the loan, the repayment terms and the capacity of the borrower to repay the loan.

Dean noted that despite a number of high-profile court cases dealing with disputes between family members over loan repayments, the nature of family relationships makes it difficult for some people to formalise loans.

“If you asked a family member to go to a lawyer to get a [loan] agreement drafted up, there is the minimum cost of engaging a legal practitioner which would be hundreds of dollars and then there’s the element of trust [coming into question],” he said.

Dean added that a loan management platform is easy, convenient and non-threatening. It generates a simple terms sheet, legal contract and agreement; repayments that’s been agreed upon. The parties to the agreement and the recipient can digitally sign that agreement. Further, the traditional mechanisms are costlier, cumbersome and can be at times emotionally intrusive.

Dean explained that some loans are intentionally long-dated, such as payments from parents to a newly married couple, to prevent one party taking 50% of the amount should the marriage break down.

“We’ve had loans that are 30 years [in duration] — put out for a long date deliberately with a special condition saying that if the property is sold then the loan is repaid. It’s designed to protect family wealth,” he said.

According to Dean, loan management platforms can potentially educate children about the nuances of lending and borrowing in a relatively risk-free environment.

“Putting [loan management tools] in the hands of young adolescents will teach them, in a benign environment, to become better borrowers. A lot of our malaise in credit usage is through over-lending, clearly, but also naivety on the part of the borrower,” he said.

Reconsidering loans between friends and family as a semi-formal business transaction may lessen the likelihood of emotional conflict. However, it remains to be seen if loan management platforms can entirely prevent the alteration of power dynamics and potential fallouts in relationships that commonly arise from one party being indebted to another.